The Honesty Collection from The Heavy Pedal

The guys from The Heavy Pedal are taking a new approach for their latest collection which will feature a selection of limited edition t-shirts. The Heavy Pedal have been selling Fixed Gear themed clothing for some time but this is the first time that each tee will be limited.

The Honesty Collection will be themed around honest sayings about competition. The first shirt to be released is titled Better Luck Next Time and is available here: http://www.theheavypedal.com/index.php/shirts/blnt-shirt.html

The shirts are American Apparel Fit and 100% Cotton featuring white discharge prints (print will feel like the shirt, not thick un-breathable ink). They are available in sizes small to XXL. Keep an eye out for other designs coming soon. 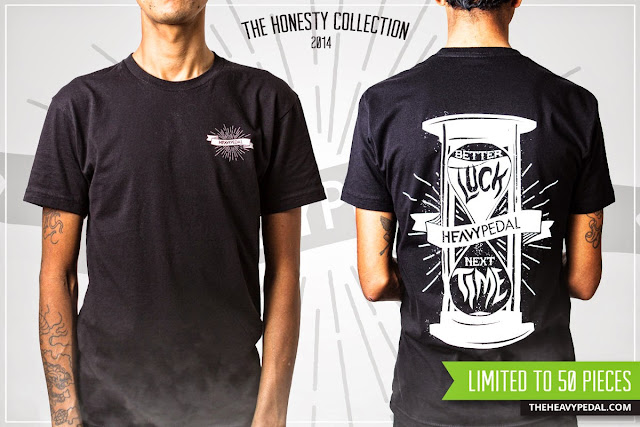 Yesterday I passed a group of cyclists in matching black lycra near Cullompton heading towards Exeter. At first I couldn't understand why a group a roadies would be pedalling so fast but as we got closer it became clear that they were riding Fixed Gear bikes. They were all wearing Das Rad Klub Jerseys - I remembered Laurent mentioning that Das Rad Klub was a Bristol company so I Googled them to see what they were up to down here.

It turns out that 5 fixed gear riders are cycling from Bristol to Barcelona to raise money for Bristol Area Stroke Foundation. You can read more about them on the Das Rad Klub blog here and sponsor them here. 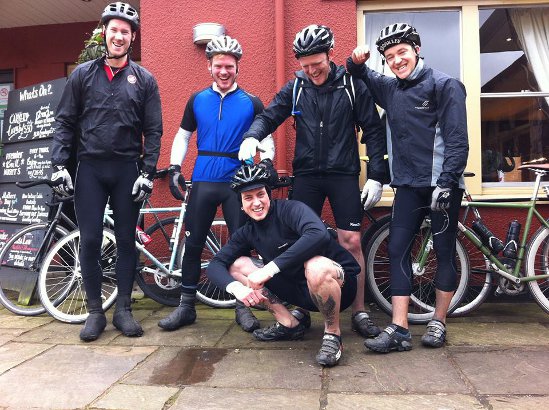 Riding from Bristol to Barcelona on a fixed gear bike (in this heat!) is pretty impressive stuff so sponsor them! Das Rad Klub have leant the guys a GoPro so hopefully there will be some footage to share once they get back.
Posted by Unknown at 10:47 No comments:

On 24th April 2013, the second edition of Exeter's #BikeFilmNight took place at the Exeter Phoenix.

Slightly over capacity (a good thing for us), the audience turned up for 90 minutes of mind blowing films.

It all started at around 8pm with "40 years in Paris" - all about BMX in the French Capital with a stunning backdrop and a rather relaxing soundtrack.

The main film was "Line Of Sight" by cinematographer Lucas Brunelle. The opening scene was clear and did set the mood of the following 65 minutes....adrenaline, speed, urban, fixed gear, couriers... without forgetting the music adding that extra onboard feel.

Before and after the films the audience interacted with:

We also want to thank all the people who turned up to this free social event, showing that Exeter and Devon has a real (growing) cycling community - as well as Claire from Exeter Phoenix Digital and our guests who gave their time to attend this evening bringing together riders/cyclists. Last but not least Lucas Brunelle who gave us the green light to screen his film.

PS: As a reminder, We are also trying to have regular fixed gear/single speed rides (we are not racing and there is no leader in the community - no real itinerary and everyone is welcome to join and bring new ideas regarding events or destinations). Always check #CoffeeShopRide on Twitter or join and keep an eye on the Facebook Group "Fixed Gear Exeter".

Posted by Anonymous at 22:26 No comments:

"...Over 6000 people came see the stunning bicycles and talk with the makers..."

It is never too easy to take some photos during such event: a lot of visitors, a lot of bicycles...etc - anyway, we managed to grab and bring back some shots...Enjoy...

If you wish to see even more photos of that day check Headset Press review HERE.

Posted by Anonymous at 18:53 No comments:

This blog was set up by Thomas and OneGearExeter for Fixed Gear and Single Speed riders in Exeter and beyond.
We ride most Wednesday evenings and you're welcome to join us!
If you want your product reviewed or your event featured give us a shout fixedgearexeter@gmail.com

Submit your photos: tag an Instagram photo with #FixedGearExeter and it will appear below.